How It All Started: The Story of Executive Director, Thomas C. Riley

How It All Started: The Story of Executive Director, Thomas C. Riley 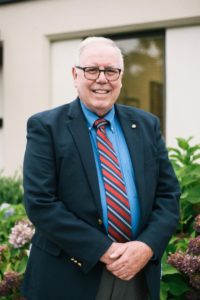 When Thomas Riley began his career in the early seventies, he never imagined that someday he would be leading a top service agency for persons with disabilities. “I never woke up one day and said I wanted to be an Executive Director… It was something that just evolved naturally,” he says.

However, in 1988, Riley had a vision for a service model and support system that the community needed. Today, that vision exists as Better Community Living, Inc., and in 2018, the agency will proudly celebrate 30 years of service – from providing 19 community-based homes to individuals with disabilities, to varying day habilitation programs, children’s programs, faith programs, employment programs, and more.

Earning a degree in Public Administration, Riley started out studying the development of mental health programming. He was working in the psychiatric ward of a hospital running small group therapy programs. “I had a knack for that, working with people,” he says. “I was running one of the first mental health day programs in the area.”

However, Riley didn’t just excel at working with people. He found a natural empathy, understanding, and compassion for those requiring a unique, often challenging, level of care. This led him to eventually work with individuals with disabilities. The time was during the Reagan presidency, and government funding had just been cut.  Most of the traditional institutions that individuals with developmental disabilities were being served by were being closed. As a result, residential and community-based services started to evolve. “I ended up working with another agency, understanding how to start a group home and get it licensed,” Riley says, remarking that the results were significant. “You could see how the quality of life improved for people who started initially in large state institutions then came to live in smaller homes in the communities.”

Riley saw a need and an opportunity in his own community, and BCL was born with a unique goal to serve the person, to offer them a life similar to anyone’s, and to use new positive behavioral approaches for lasting skills development. “I used a lot of the ideas of community-based services that I’d learned, and I knew it was important to have services that were offered locally and still nearby individuals’ families,” he says.

Riley began with what he felt was critically important – providing persons with a place to call home. “It was providing a chance for individuals to move into a regular household, a household like my own, or anyone else I knew, a three or four bedroom ranch” Riley says. “They could then learn to use community services, go to a regular dentist, doctors, and banks. For people that lived in the state institution, they were never exposed to these things.”

The institutional setting not only limited a person’s exposure to the outside world, but it also removed an individual’s ability to live autonomously, to develop independence, ownership, or a sense of self. Washing of laundry in the institutional setting was always an issue. It’s that simple act of moving into a house, and the laundry stays in that house. They get their own clothes. It’s that natural flow of life that is a huge benefit to people.”

Riley also wanted to position the agency directly in the community, to work more closely with families and provide more opportunities for real relationship building. “I wanted to make the agency compact geographically. The reason was to maintain quality and connection with the people we were serving. Communication with families is very important, and I wanted to make sure we had input from the families and consumers all the way to the top level of the agency,” Riley says.

BCL thus started with residential programs and day programs. The first home contained four individuals. Then, more homes were acquired. “We started to set up duplexes because a 2-person household felt more natural than a 4-person household. It also provided more dignity and privacy… For example, people with autism have some really unique needs. They respond best to a quiet household,” Riley says. “We’ve also had people who stay home. For some, the day program is too much stimulation. It’s not an appropriate place for them to go. We provide services for them and things to do out of a house where they are more comfortable and more at ease. The behavioral challenges we may see in other environments we don’t see by doing it this way.”

Within just two years, BCL was serving 20 individuals in five different households. Riley secured committed, long-term staff that were dedicated to BCL’s new consumers and its mission. “The consumers were new to the households, and staff were new to the consumers. From being in the institutions, many individuals had learned some very difficult behaviors. We trained our staff to use positive behavioral supports and these behaviors – behaviors, like self-abuse – stopped. Other agencies would restrain, but we used positive behavioral support interventions, using restraints as a short-term, last resort.”

Today, BCL offers 19 homes to a range of 45-50 individuals, along with its numerous other programs such as Day Habilitation, Individual Supports, Children’s Services, Bridges to Faith, Shared Living, and its Supported Employment Network.

“Our agency had a focus – that we stand by the people we are serving. We chose to change the environment using positive behavioral supports. It’s about common sense and treating people with respect and dignity… and this paid off for people who had challenges. Once they learned to feel comfortable again, their challenges subsided,” Riley says.

Today, Riley has countless stories to share. “I think of the people we started with in this agency. Once we were able to establish a place they felt comfortable, safe, and secure… a lot of the challenging issues they had in their life went away. They developed new skills that were critical to obtain a better quality of life,” he says. “For some, it may take time. It may take a couple of years. Eventually, you see their comfort level, communication skills, relationships improve… That, I think, is the rewarding part of the work, to see people gain so much more control over the quality of their life.”

Riley shares a story of one individual who came to the agency without the ability to speak. “We worked with him on his communication skills. Now, 10 years later, he has good communication skills. He can control his environment, build relationships,…and he’s happy. He’s happy and comfortable, and that’s really important of the people we serve in residential programs,” Riley says. Another story describes a woman who had multiple children, who needed residential services. “She visited various agencies and picked ours. We worked with her, helped pick out the house they were going to live in, and helped them move in. Before that, they’d been at a state institution for 30 years…”

What BCL has provided has been life-changing for persons with disabilities and their families. Families were, and continue to be, thrilled by their loved ones’ improvements and results. Often, a person’s successes and breakthroughs have been accomplishments that many thought impossible. “It’s about serving the person,” Riley says. “It’s about understanding them, and doing things in a way that is positive, that reinforces their skills, and that serves their needs.”

“We keep the individual’s interests, the families’ interests, and our interests shared. We’ve made it a community for everyone – and it’s made our agency what it is today.”