Bridges to Faith Offers Religious Inclusion for Persons with Disabilities

Bridges to Faith Offers Religious Inclusion for Persons with Disabilities 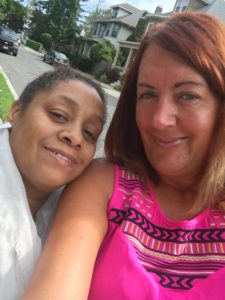 Bridges to Faith coordinator Heather Dextradeur was honored to speak at the Ruderman Foundation interfaith meeting on June 26th, before a full room of clergy members and representatives from all major religious groups. The meeting, held at Northeastern University in Boston, served to educate attendees about community resources that facilitate faith-based social inclusion.

Founded in 1995, the Bridges to Faith program has found tremendous success uniting individuals with disabilities with the faith community. The program pairs persons with willing members of local congregations who wish to offer support as Faith Companions. Faith Companions arrange for the individual to fully participate in the life of the congregation. For the individual, this offers an opportunity to have not only their spiritual needs met, but it also provides a sense of belonging, friendship and value not easily obtained. Further, it also helps to enrich the lives of the congregations who welcome them.

Heather presented the goals, values, and successes of the program, specifically as she has witnessed it in her role as Coordinator for the last three years. Joining her was Sharon Costa, a participant of Bridges to Faith, whose moving story helped demonstrate the true impact of the program.

“When I first met Sharon, she was living with a Shared Living Provider in Fall River. She was referred to me through Bridges to Faith to help her meet her spiritual needs.  Like most referrals, I received a packet of need-to-know information, such as medications, allergies, a list of doctors and basic history. The piece that often seems to be missing is the information that makes a person who they are. When I met Sharon, there were two things she wanted to be sure I knew. One, she was of Cape Verdean descent and two, she was a Christian. She also felt it was important for me to know how proud she was that she had a Bible and read it every night. Soon after that, I discovered that Sharon could not read but I understood how significant it was for her to look at the pages and the strength that it gave to her.

“Sharon then informed me that she was attending a Portuguese Catholic Church with her caregiver every Sunday.  Although she was not Catholic, nor did she speak or understand Portuguese, she stated, “it is better than nothing.” Sharon was hungry for God and wanted the experience of faith, God and church so much that she was willing to settle and attend a service she didn’t understand and that was not her faith. I immediately found a faith companion who began taking Sharon to a local catholic church in the Fall River Community. Sharon seemed to enjoy this new church and would often go out to eat with her volunteer. She met the volunteer’s family and was even invited to a Bruins game.  Sharon seemed to enjoy the church and it became a Sunday ritual. I always had it in the back of my mind that Sharon’s true faith is Christian and she was hoping for a more inclusive role in her church.

“Due to medical issues with her caregiver, Sharon was transferred to a new Shared Living home in New Bedford.  Sharon had lived in various homes through multiple agencies for the past ten years. Now residing in New Bedford, Sharon inquired about a New Bedford area church where she attended a Bridges to Faith Christmas event. Sharon said she enjoyed the church very much because it had lively Christian music, singing, dancing and she recognized many of the members as there was a large Cape Verdean population.  She said she “knew them when she lived with her parents.” Sharon began to attend the new church and the agency helped to support the change. Her respite provider would drive twenty minutes each way to bring her each Sunday. The Program Manager would also provide transportation as this became the highlight of Sharon’s week.

“Sharon developed many natural friendships at church and before long she met a new friend Christina.  Christina not only became her Faith Companion, she became so much more. Christina was an active member of the church. She was part of the choir, the coordinator of events and missions for the church, and leader of Woman’s Group. Sharon wanted to participate in religious activities offered by the church and not just attend Sunday Service. Sharon asked if Christina could take her to Bible study and Christina agreed. Sharon started to go to Bible study every Thursday. The pastor would often have someone read the verses out loud as he understood that Sharon could not read. When I asked Sharon how she was reading the Bible every night, she explained she was holding it and looking at it. “God made the words clear for me,” she replied.

“The next thing Sharon wanted to do at her church was become part of the choir. The church took their choir very seriously and only the most devoted church members were allowed to even audition. Sharon was DETERMINED to be on the choir. She asked if she could attend the practice as she knew that would be the only way she could learn the dances and the words to the songs. Christina picked up Sharon every Wednesday to attend choir practice. For six months, Sharon NEVER missed a practice. Any time there was a new song, Christina would ‘YouTube’ the song for Sharon so she could learn the words as she knew she could not read. Sharon practiced day and night listening to the videos. The day had come where Sharon became an official member of the choir. Sharon extended an invitation to all she knew to watch her sing on stage for the first time. Sharon filled the church with all her friends she invited to see her sing. It is a very small church and the pastor joked that he would invite his friends and family but Sharon seemed to have a gift, as she was able to pack the chairs.

“Sharon now has a new family. This is not a “paid family.” It is not paid staff support, but people who embrace her for who she is.  Sharon attends all the parties, cook out and birthday parties. Sharon has never missed a Sunday, a Bible study or choir practice. She rang in the New Year attending a party on New Year’s Eve with all her new friends. Sharon no longer has to say, “I want you to know I am a Christian.” She has forever marked her identity, made her religious preferences known, paved her own way and she is a Christian.”

Meeting attendees welcomed Sharon’s story with great affection and full appreciation for the continued success of the Bridges to Faith program. It’s mission of social inclusion in the faith community is a central piece of effectively serving persons with disabilities across all facets of life. Further, Heather also discussed her efforts to consistently put social inclusion at the forefront of the program’s mission. In addition to its already large network of partners and opportunities, Heather discussed various recent expansions. This includes a new partnership with North Baptist Church, and the hosting of a monthly pot luck and movie night. Several program participants also volunteer weekly at a local soup kitchen, while others help to host coat drives for the homeless. Actions such as these, according to Heather, have opened the door for natural friendships and inclusion in the community.

To learn more about the Bridges to Faith program, click here.