BCL’s Monthly Friendship Dinners: A Chance To Learn and Connect

BCL’s Monthly Friendship Dinners: A Chance To Learn and Connect

Relationships, a sense of community, and a feeling of belonging… these are qualities many of us enjoy on a daily basis, but rarely fully appreciate. For persons with disabilities, the chance to meet new friends and attend social engagements is often limited. This is why Better Community Living, Inc. (BCL) is committed to supporting relationship-building opportunities for the adults with disabilities that we serve. 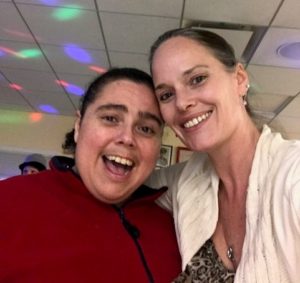 Among numerous initiatives is BCL’s new, recurring monthly “friendship” dinner which started simply as an idea and quickly became an overnight success. “We help people meet their dreams and needs… that’s the inspiration. That’s where this all started,” says Jacqueline Brum, dinner coordinator.

Jacqueline says that through her work with the agency, she has been able to learn the needs and desires of the individuals she assists. “I was starting to think that there was a lack of getting together in groups, for a chance to meet others. There’s a common issue of lacking relationships, knowing how to make relationships, or even just having unpaid friends who aren’t staff and a chance to meet new people.”

With this, Jacqueline had an idea and informed her colleagues. The idea of hosting monthly dinner gatherings was born, and now, more than 80 individuals consistently attend each month. This includes BCL’s consumers – adults with disabilities – as well as their family members, friends, and numerous BCL staff and their families who equally enjoy the event.

One of the unique approaches to the dinners however, is that BCL’s consumers serve as the event organizers, planners, and even the chefs. “It’s totally self-run,” Jacqueline says. “One of my consumers, his name is Carol, he is actually the DJ for the event! His staff Mary is one of the coordinators for the buffet decorations. We also have other individuals, Cristiano, Jordan, Ashley… they are our maintenance crew. They help set up, organize, and break down the event,” she says.

Jacqueline calls the event a ‘friendship potluck dinner.’ The entire menu is pre-planned with each guest choosing which item they will make and bring. “Every individual that attends brings a plate of food they made at home. We provide a menu. They have to go to the store, buy their items, and plan for their preparations,” Jacqueline says. This provides a sense of responsibility and involvement, and it has also taught many individuals new skills. “Actually cooking for a large party, and not just making enough for their housemates, is something new. They are learning to make huge, family-sized event platters of food,” Jacqueline says.

Jacqueline is extremely happy with the success of the program since it started in August. “We actually grew so large from the first dinner that we had to rent space the following month. Now, we are using the event room at the Fairhaven Senior Center,” she says.

Of course, the true success is in the impact that the dinners are making for all who attend. Jacqueline points out that the dinners bring together people that may not meet otherwise. Attendees range from individuals in BCL’s homes, to individuals with families in the community. “There’s a lot of new friendships that are made because the people that live in the community, they don’t know people in our homes. Even people in our homes don’t know people in the other homes. They make friends. Then, they’re calling each other and making plans to see each other the next month. They’re now able to plan for new friendships and create new events for themselves. People they wouldn’t even have known had they not had the chance of doing so at this event,” Jacqueline says.

The events are fun too. Each month bears its own theme. “They get excited about decorating for that theme and dressing for the theme. These have included holiday themes, Team Spirit night for Touchdown Tuesday, and upcoming themes like the December Christmas Sweater Party, the New Year’s Ball, and Valentine’s Sweetheart dinner. Balloons, tablecloths, table toppers, plates, and even music are catered to the theme – and after dinner, everyone dances.

When asked why Jacqueline made the decision to go above and beyond in her work, and to organize something with her colleagues that no one had asked her to do, she replied, “We love the people we support, and we really like to see them as happy as possible. It’s about being a part of their support and their happiness, and helping them to fulfill their needs and their dreams. There’s a common goal. We all have a different idea of how to make this happen. This was my idea…”

The monthly friendship dinners occur within the third week of each month, from 5-7pm at the Fairhaven Senior Center, unless otherwise stated. For more information, contact Jacqueline Brum at 774-992-4756 or jacqueline_brum@nullbettercommunity.com.